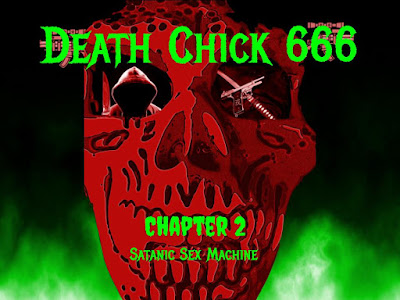 The girl set the decapitated head on the table.

The mouth moved but it takes more than a mouth to form words and he was missing everything from the neck down. She turned the head so it could gaze at the man sitting on the other side.

The bluesman adjust his fedora and leaned close to the severed head.

“What did he call himself?”

“I don’t know, Powertool Paul or something equally stupid.”

The severed head mouthed a silent protest. He felt Powertool Paul was an awesome name.

“You said one for one. I brought you one.”

“You did,” the bluesman said as he reached into the pocket of his sharkskin suit. He pulled out a single sheet of paper folded in quarters. He slid it across the table to her.

She opened it and found written in black ink was a time and a place.

“The collectors, Manny and Tommy.”

“Remember it’s one for one.”

“Are you saying I can’t kill them both?”

“Not if you want to keep having my help.”

“Dude, that Hellscape armor is banging.”

The girl looked at the long-haired skater-type guy drinking a slushie, or whatever the Gas and Go called their syrup and ice concoction, as she climbed off her bike, took off her helmet, and told him, “I’m not a dude.”

“I didn’t mean it in a bad way. I was just saying your costume is fucking awesome, you look like one of those professional cosplayers I see on the internet except you’re stuff is the most legit looking I’ve ever seen. Damn even that motorcycle looks like the bike in the game. Is there like a comic con or something going on today?”

She looked down and realized she’d donned game armor from her cache of weapons when she conjured the motorcycle. She hadn’t planned on anyone seeing her until she was in the store.

“That Gatlin gun looks legit,” the kid continued as he spotted the weapon she had on her back, “How’d you do that?”

“It’s a long story,” she said as she moved past him.

This made her stop. She turned around a looked at him, she even considered the weapon on her back or the other one strapped to her leg as she told him, “Of course I play. You think I’d be dressed like this if I didn’t?”

“If I was a guy would you ask me that question?”

He actually thought about it for a second before he said, “Sorry, I didn’t mean to come off as one of those gamer bros who think chicks can’t game. That wasn’t cool.”

He actually seemed sincere so she said, “No worries. I’m a little sensitive about that subject.”

“Yeah, I could tell. You mind if I ask your name?”

He looked confused but then it hit him, “That’s your game handle, cool. I’m Satanic Sex Machine 171002.”

“Yeah, I guess a lot of dudes wanted to be Satanic Sex-Machine. You can call me Trevor since we’re like in reality. Unless you want to call me Satanic Sex Machine.”

“What’s that stand for?”

He laughed. It was a stoner’s laugh, somewhere in between a seal and someone who carries around an oxygen tank on a cart. It made her think of someone she’d rather forget.

“Nice to meet you, Trevor,” she told him before she turned and headed for the entrance.

“Manny and Tommy are still inside talking to management. You want to avoid them. They don’t appreciate cosplay the way I do. They’ll probably give you a lot of shit.”

DC drew the rail gun from her hip, “That’s why I brought this along.”

Trevor laughed but he stopped when she actually opened the door.

“They told me not to let anyone in,” Trevor said.

“Stop me,” DC said as she went inside.

“Whoa,” Manny said as she entered, “What are you?”

He was by the slushy machine helping himself while his brother, Tommy, was strongarming the owner into paying him protection money.

When she didn’t answer right away he said, “You might want to wait outside for a minute. We’re doing business here.

DC shot him in the foot with the rail gun, pinning him to the floor with a spike. While he yelled out in pain she reached into his jacket and pulled the gun he carried out of the shoulder holster and tossed it away. While he watched his gun slide across the floor she knocked his slushy out of his hand.

Tommy was reaching for his pistol when she pointed the rail gun at his head.

“What the fuck is going on here?”

“You don’t remember me?”

“I don’t even know what the fuck you are.”

She shot him in the face burying a six-inch spike in his forehead.

“How about you? Do you remember me?” she said to Manny.

DC put a spike through his other foot.

“You still driving that tricked-out Charger?” she asked him.

“Yeah,” he managed to say as he pointed to the lot where his black Dodge was parked.

“He said I couldn’t kill you. Not yet anyway.”

Manny wasn’t sure what to say so he kept his mouth shut.

“He didn’t say anything about your car though,” She told him as she put away the rail gun and drew the Gatlin gun attached to a magnetic holster on her back. She left him there and went back outside.

DC looked back to make sure Manny was watching and then opened fire on his beloved muscle car. The gun from a video game shredded the vehicle. In the space of ten seconds, she turned Manny’s ride into a smoking pile of scrap metal.

Trevor was standing there with a look of disbelief.

She went back inside and walked up to  Manny who’d lost his balance and was sitting on the floor now. He was trying to free himself but both spikes were deep into the floor. They weren’t coming out anytime soon.  She pointed the Gatlin gun at his face. He covered up and pleaded for her not to kill him.

DC left him on the floor. The store owner was cowering behind the counter, she left him there too.

As she walked by she looked at Trevor, told him, “I don’t cosplay,” before she hopped back on her motorcycle, which like everything else she was wearing or carrying did more than just look like it was from the game.

“They’re going to kill me,” he told her.

“What do you want me to do about it?”

DC looked him over, he looked terrified. He should be.

She put on her helmet and said, “Get on.”

He sat behind her. She kick-started the bike and they both watched the fuel gauge glow red and then move from nearly empty to full.

“Does that work the way I think it does?”

“It’s a Reaper Soul Cycle so if you’re thinking it’s powered by the souls of those I’ve slain the answer is yes.”

"So, this is like we're playing Hellscape, but for real?"

Look for the further adventures of Death Chick 666 right here. Be sure to follow us on Twitter @10thrulebooks for updates.
If you dig this you might want to check out our Books page.
Want to contribute to the story? Email us 10thrulebooks@gmail.com

We had so much fun the first time we're doing it again. That's right more Rock-N-Noirror.  What is Rock-N-Noirror? It's noir and or horror stories from the low down and sleazy side of rock and roll. You can find out all about it  here . (if you'd like to submit I highly recommend checking it out, plus you'll enjoy it). This time we decided to do one of those 'stories inspired by _______ all the cool indie publishers are doing. It should be easy.  So, we're looking for stories inspired by the most excellent band Guns and Roses, and/or the late 80's early 90's scene they spawned*.  *That's right, LA. Guns stories are in play. The rules as to what that entrails are pretty loose. For legal reasons keep it inspired not plagiarized, meaning no lyric quotes.  Stories need to be between 1k and 10k words. Genre is crime, horror, or sci-fi and any sub-genre of those three. Violence, sex, and bad words are not only acceptable but encouraged (do try to bring
Read more

Dylan was so busy fucking Stacy he didn’t hear the power drill come to life behind him. He was thinking how he was going to finish on her tits like he saw in the porn he watched earlier in the day when the spinning bit drove through the back of his head until the brain and blood-covered tip pushed through his right eyeball. Stacy assumed the wet hot sticky fluid splashing over her naked body was a different body fluid. She opened her eyes and saw the spinning drill bit reverse itself back out of Dylan’s eye.  Powertool Paul tossed the dead teenager aside and stepped into view giving Stacy an eyeful of his seven-foot frame. His face was covered in a welders mask and the sleeves were cut off of his blood-stained flannel shirt so his thick arms covered with the scars were visible. While it just appeared in the low light to be random cuts a closer look showed he had carved a series of ancient runes and symbols into the flesh.  He revved the drill in his left hand and then did the same wi
Read more

“So, what do we do now? Just wait?” “Yeah.” Trevor held up his phone, “I don’t get any service up here.” “People don’t go camping to spend all their time looking at their phones.” “Which is why I don’t camp. Actually, shouldn’t we have like a tent or something? A sleeping bag?” “I don’t think we’re going to have to wait long after the sun goes down after what we did to the old man back at the store.” “We?” “Okay, me.” “Speaking of which, what am I supposed to do when these wolfmen show up? I don’t have any weapons.” DC, who was wearing her full armor with the rail gun on her hip and the machine gun on her back pointed at the picnic table, “Hide under there and let me take care of it.” “Could you give me a weapon? You can get stuff from the game so how about one of those fully automatic double-barrelled shotguns, what do they call it?” “Beezlebub blaster. Actually the Big Bad Beelzebub Blaster.” “Yeah, the quad B. Can I have one of those? It’s my favorite in the game. I kick serious a
Read more