Showing posts from March, 2019
Show all

It's time to go back to Hell 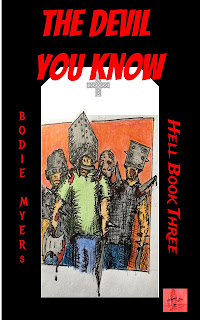 New Book Does more " Awesome read. Bad cop v bad guy continue their fight in hell. Fun vision of hell as a thorny battleground filled with weapons and smack talk. Reads fast and like you are watching an action movie --but no special effects could live up to story playing in your head." sound good to you? or perhaps some "...  would make an awesome graphic novel. A one-eyed guy with a knife sticking out of his back, battling his way through a hierarchy of bad guys in Hell, tells the story of his death and its aftermath. Big fun if you're so inclined, but if you prefer cozies, shoot some meth first." sounds like a good time? Well, you're in luck. Bodie Myers has unleashed yet another round with The Walking Funeral.  The Devil You Know - Hell Book 3  has risen up from the depths and now walks the earth. The hardcore, hyper-violent, action, horror, splatterpunk, noir series is back bitches, and it's back with a vengeance. We're going to cel
Post a Comment
Read more
More posts