Skip to main content
July 14, 2017
Free Sample Friday is back. Get a taste of the new Cooke novel Best Laid Plans of Idiots and Fuck Up's.

He caught his reflection in the driver’s side window. In the hazy, yellow, light the blood on his shirt looked black. He looked like a battlefield surgeon, or a patient. The gash in his upper right side, which had begun throbbing as if the two sides of the knife width gap were trying to pull themselves together, made him feel like the latter. Cooke curled the handcuff hanging from his right wrist into his palm and focused on filling the tank.
The girl with half a face sitting in the front seat continued to text him as he pumped gas with his one fully operational arm. He ignored the device vibrating in his pocket.
He had chosen the farthest pump, used his credit card so he did not have to go near the brightly lit convenience store. His appearance alone would have someone making a call to the cops. Inside the car was worse. Three dead bodies, two in the trunk and one in the backseat, with a fourth guy on the verge of joining the other three.
The choice of pumps seemed solid, until an economy sedan pulled up to the pump directly opposite of him. He was too large of a human being to be invisible, but if the customer, a mere six feet away, concentrated on pumping his own gas, he did not have to worry.
The sweet, almost forgotten smell of good weed and high-pitched laughter emerging from the vehicle let him know why they had chosen the second most outlying pump. Even without seeing them, the snippets of conversation, unfunny quips followed by nearly uproarious laughter, marked them as what he would call kids. When he was their age he did not consider himself a kid, neither did the state of Colorado, at no time during his trial did anyone suggest he be tried as a juvenile.
At least two of the partying youngsters made their way into the store, taking orders from the others for mid drinking binge staples like gum and cigarettes. Even with the gasoline flowing at a glacial pace, he felt he could be on his way before the others returned.
He still did not know where he would go, but at least he would have enough gasoline to get to there. One of the kids said “Oh shit.” No one giggled in response.
A cop had pulled up to the store. Cooke watched him in the reflection of the window so he could stay behind the pump. At this distance, he was just another guy filling his car with fossil fuel. The cop, who was still in his car, did not know when the tank was full, so there was nothing to stop Cooke from bringing this to an end. If he appeared to be trying to hurry it might draw the lawman’s attention. Anything more than a casual glance would mean trouble.
He let another gallon crawl into the tank, as he was loosening his grip on the pump trigger the officer got out of his car. The cop looked his general direction, but only because looking around upon exiting the squad car was second nature, then turned and headed into the store.
The young party people had chosen the two females in the group to pick-up supplies, and they nearly collided with the officer as he entered and they exited. He kept watching as the officer stayed in the doorway giving the girls a long look as they walked the stiff gait of the guilty toward their car.
The cop was still hovering in the doorway as the little screen on the pump asked if Cooke wanted a receipt. He was pressing the little button on the side reading no as he heard one of the men by the pump opposite of him say “Oh fuck, I think he’s coming this way.” 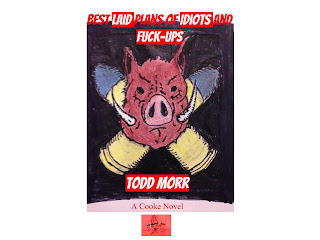