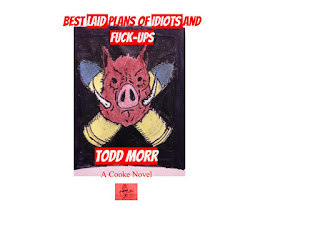 I Am the Boss of Number 2

To celebrate the release of the long awaited follow up to Captain Cooker the second Cooke novel (don''t call them books) - Best Laid Plans of Idiots and Fuck-Ups - we bring you a list some of our favorite pulp fiction that skips the boring parts, focusing on the 2nd in a series. Not so much sequels but second entries in an ongoing series.*
Yeah, we probably missed your favorite, but you already know that one.
Best vintage noir classic book - The Outfit - Richard Stark. Why?  It is a Parker novel, don’t judge the character Parker on the shitty Jason Statham flick**.  Parker is the man and he is at his bad ass best as he takes on the mob. It is classic Parker, he has a great plan, things go to hell, but he uses his brains and his brawn to end up on top.
Best recent noir book with a female protagonist - Diesel Therapy - Greg Barth. Why?  It is a Selena novel. Don’t judge Selena on the movie bearing her name either (Like the previously mentioned Parker also starring Jennifer Lopez) . It has nothing to do with the toughest and maybe most flawed woman in crime fiction.  Selena suffers a lot more abuse than Parker ever did and she takes a beating in this one (spoiler she takes a beating in all of them) but she finds a way to get the best of everybody. After reading the series (it has been consistently awesome through all five, including the latest and last Everglade) you too can experience the excitement of seeing VH-1 is showing a movie called Selena and the disappointment of realizing it is not an adaption of the Greg Barth novels.
Best recent noir with a male protagonist - Remo Goes Down - Mike McCrary, Why? Remo is at his bad ass best. . . Actually no. Instead everyone’s favorite fucked up defense attorney continues to suffer the consequences of the one time he kind of did the right thing. Remo Goes Rogue favorites, professional killer Hollis and psychotic Jesus freak Lester show up to add to the mayhem.
Best second movie in a series - Aliens - Why? sorry Empire Strikes Back, The Dark Night, and The Winter Soldier but this is simply the best sci-fi, horror action movie ever made. One of the few hybrid genre movies that works in all three genres. Instead of making the mistake of remaking the first of the series (A mistake embraced in the forgettable Alien 3) James Cameron took the universe created in Alien and went a totally different way.  Those who knock this one because it so different than the first should be forced to watch the three Hangover movies back to back to back, since they clearly enjoy seeing the same thing done slightly worse over and over and over.
Best second season of a crime fiction television show (partial) -  a tie between Animal Kingdom and Preacher. Maybe Preacher is not crime fiction but it features plenty of crime, humor, and flat out violence. Five episodes in the show is much closer to capturing what made the comic so much fun than it did in season one. All while still doing it’s own thing, which sorry purists, is what an adaptation should do.  Animal Kingdom has stepped it up in season two so far as the crazy O’side crime family we all love keeps jumping head first into trouble. This time robbing a church and opening a bar we at 10th Rule are sure is based on one we have a had a drink or ten in back in our O’side days.
Best Number 2 in the NBA - Alex English. That’s right nobody wore the deuce on his chest  better than the former Denver Nugget (over 25,000 career points). Unlike the rest this one is undisputable.


* This is a subtle way of hinting there just might be more Cooke novels in the future.
** We at 10th Rule like Jason Statham ( He kills it in the underrated Safe, and the early Guy Ritchie films)  and we are among the few Stark fans who thought he would make a good Parker. The movie doesn’t work, but it has more to do with pacing and the Parker as Robin Hood bullshit than Statham.