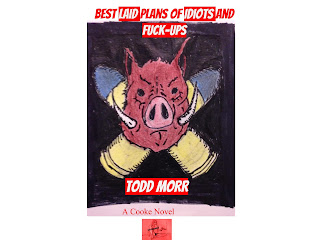 We sometimes do a thing called Free Sample Friday. Which is just what it says, a bit of 10th Rule Book’s pulp fiction that skips the boring parts. We are not doing that this week. Instead we are letting people download a whole fucking book for free on the Kindle.

You see on this weekend a few years ago a man calling himself Cooke walked out of a Colorado prison a free man*. He made his way to Oceanside, CA where he found himself some trouble, a lot of trouble. So to celebrate the anniversary of his freedom we are giving away the story of that trouble - Captain Cooker. Not just a chapter, but the whole damn thing. Come Monday it will cost money again (only three bucks), so get on it and get yourself some free hard-boiled action noir one reviewer called a ‘Chain of fistfights’.**
Of course we could have stopped there but we did not. Look for the second Cooke novel, Best Laid Plans of Idiots and Fuck-Ups for only .99 on the Kindle this weekend. That’s right the whole Cooke saga is available for less than buck. This is a weekend thing, come Monday these things will cost actual money (well like three bucks a piece).
It’s a Cooker weekend. Don’t miss out.***

* He is a fictional character so none of this stuff actually happened. We made it sound like it did because we are liars.
**They meant it as a bad thing which doesn’t make much sense to us.
*** Already have all the Cooke novels? Double Tap, The Walking Funeral, and Camp Hendrix are less than a buck this weekend too.