November 17, 2018
A little taste of The New Mexico Institute of Re-Animation

Chandler was looking at the wall when he heard something hit the floor. He assumed the sounds of
a struggle were just Eddie going to town with the blade.  He wanted Eddie to kill Bobby on the table,
it would make clean up a lot easier. The footsteps he heard next didn’t sound like Eddie’s work shoes.
He turned to see a blood-covered Bandsaw Bobby standing over Eddie's body. The knife Eddie was
supposed to use on Bobby was in the dead serial killer's fist.
“Holy shit,” Chandler said as he started running for the door.
Bandsaw Bobby was fast for a dead man. He caught Chandler just before he reached the door by the
collar of Chandler’s lab coat. Bandsaw pulled Dr. Chandler within stabbing range and then brought
the knife down on the top of Chandler’s head, driving the blade through his skull and into his brain.
Bandsaw spun Chandler around with the knife stuck in the top of the doctor’s head so he could look
in the man’s eyes as the life drained out of him. He didn’t get much to look at as getting six inches of
steel shoved through the brain killed Dr. Chandler almost instantly.
“Did you enjoy it?” Bandsaw asked. Chandler didn’t answer.
Bandsaw pulled the knife out of Chandler's head and let the dead doctor drop to the floor. Bandsaw
took off Chandler's lab coat and put it on before he walked to the door.  It didn’t really fit him he
was a couple sizes bigger than Chandler but Bandsaw didn’t really mind. 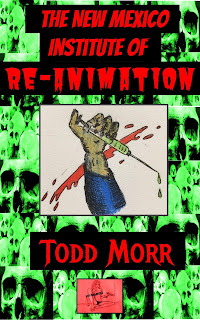 He pushed down on the handle and nothing happened. He tried it a few more times and got the same
result. Bandsaw Bobby stood there staring at the door, knowing he was missing something obvious
about the operation of doors but unable to figure out what it was.
There was a door on the other side of the room, this one was open. Bandsaw went in and saw the rows
of bodies. Bobby moved across the room, ignoring the dead men and women stored there. He found a
door on the other side and found it locked. Again he felt there should be an easy solution to this
problem but could not bring it forth.
Eventually, he grew bored staring at the locked door and went back to the other room. He sat on the
examination table and waited for someone to come open the door.
His mind was muddled and foggy, all he seemed to have was the instinct to do harm, but the longer he
was alive the less foggy it was. He looked around and recognized some things. He was a killer before
he died, and that stayed with him, but as he sat and looked around he remembered he was more than
just a killer. He had other skills too, skills he could use right here in this bland white room.
He quit watching the door and put the two bodies on tables like the one he’d been on when they
brought him back. Even with his muddled mind, he had been through the process enough times he felt
with his skills from a previous life he could repeat the process.


He was after all a skilled phlebotomist. 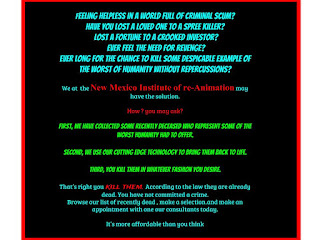 Get the rest for a mere Ninety-nine cents!

We had so much fun the first time we're doing it again. That's right more Rock-N-Noirror.  What is Rock-N-Noirror? It's noir and or horror stories from the low down and sleazy side of rock and roll. You can find out all about it  here . (if you'd like to submit I highly recommend checking it out, plus you'll enjoy it). This time we decided to do one of those 'stories inspired by _______ all the cool indie publishers are doing. It should be easy.  So, we're looking for stories inspired by the most excellent band Guns and Roses, and/or the late 80's early 90's scene they spawned*.  *That's right, LA. Guns stories are in play. The rules as to what that entrails are pretty loose. For legal reasons keep it inspired not plagiarized, meaning no lyric quotes.  Stories need to be between 1k and 10k words. Genre is crime, horror, or sci-fi and any sub-genre of those three. Violence, sex, and bad words are not only acceptable but encouraged (do try to bring
Read more