Free Sample Saturday is Back, Bitches

This week we're bringing you a sample from A Night at Swinging Dick's Saloon Enjoy.

“How did you lose your arm?”
The man with the long beard gave Drew an odd look which made Drew immediately regret asking the
old man whose right arm ended just below the elbow what happened. If he hadn’t been trying to
impress Jenny he would have let the guy alone.
“I never lost my arm.” the old guy said as he used his good hand to sip some of his pint of the yellow
swill found only on the taps of Swinging Dicks Saloon known as Red White and Blue beer.
Drew nodded. The last thing he wanted to after finally getting Jenny to meet him for a drink was to
get into an argument with a crazy person over whether or not he still had an arm.
“Now,” the old man continued, holding up the stump on what was left of his right arm, “My arm did
get severed a while back. Is that what you meant?”
“Then you should have said so. My arm was severed, it’s not lost. I know where the damn thing is.” 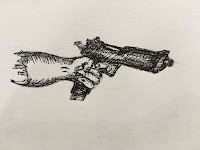 “Uh, yeah.”
“Oh,” Drew said. He really wanted to go back to the bar and pretend this conversation never
happened. Jenny was sitting there looking at him and he was sure she would be disappointed if he
came back without the story on how the old guy sitting in the corner came to have his arm severed
just below the elbow.
“Ask me again kid. This time do it right.”
“Uh, okay. How did your arm get severed?”
The old guy smiled, showing he was down a few teeth, before he said, “That my young friend is a
story one tells over a beer or two. If you're looking for a few sentences you can bring back to your lady
friend I’m afraid I can’t help you. Now, if you wanted to bring your lady friend and perhaps a pitcher
for us to share then we can get down to business.”
“I don’t know...”
“Come on, kid,” the old man said, “It’ll be worth the price of some of this swill Richard serves.”
“I need to get back to my date,” Drew told him.
“Fine, I understand. Hearing my tale will not get you any closer to finding out the color of that lovely
young woman’s underwear. Perhaps another time we can sit and have a drink and I’ll tell you how I
lost my arm to a Yeti.”
“Did you say Yeti?”
“Yes.”
“Like the cooler?”
“No, like the abominable snowman.”
“Abominable snowman? Like in the Rudolph the Rednosed reindeer cartoon?”
“The Yeti I encountered aren’t near as cute and lovable as the one on the show.”
“You’re fucking with me, aren’t you?”
The old guy drained his beer and held up the empty glass, “Only one way to find out.”
Drew walked back to Jenny and ordered a pitcher of Red White and Blue. They returned together and
took a seat at the old man’s table.
Drew poured them all a glass of fizzy yellow liquid. While he was filling pint glasses the old man stuck
out his only hand to Jenny.
After she took it he said, “Dr. Stanford Hatchetstone the third. It’s a pleasure to meet you.”
“Jenny.”
“I’m Drew,” Drew told him as he slid a full glass of beer in front of the old man.
“Pleasure to meet you both,” Dr. Stanford Hatchetstone the third said as he wrapped his fingers around
the glass and lifted it up. Before he put the pint to his lips he said, “My friends call me Hatch, or Doc,
or on occasion Doc Hatch, and anyone who buys me a drink is a friend of mine.”
While Hatch took a long drink, draining half the glass, Drew said, “I believe you were going to tell
us about the Yeti.”
“You are correct.”
“I thought they didn’t exist,” Jenny said.
“A common mistake. They are notoriously shy around humans and for that, you should be thankful.”
“Aren’t they kind of like bigfoot?” Drew asked
“Indeed they are,” Hatch said, “much the same way your beloved black lab is like a wolf. They’re
related, maybe at one time they were much the same but over time one became a loyal house pet and
the other stayed a predator.”
“How did you know I had a black lab?”
“That will be part of the story. Trust me.”
“I don’t think either one is real. They’re like UFOs or the Loch Ness monster,” Jenny said.
“Oh, just like the UFO’s, this beer and the chairs we’re sitting on the Yeti and his gentler cousin Big
Foot are very much real.”
“So, do you believe in UFOs and the Loch Ness Monster?”
“No, I don’t believe in UFOs, I know for a fact they exist, but that’s another story for another time.
The Loch Ness Monster is, of course, bullshit. Everyone knows that.”
Doc Hatch finished off his glass of beer.
He was reaching for the pitcher when Drew pulled it away and said, “I think you owe us a story.”
“You’re right,” Doc Hatch said, “It started in Alaska…” 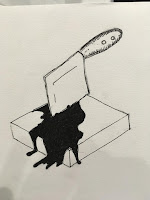 It felt like a truck hit me, though I suspect it was just the monster's fist. Had it used its claws I would
have been dead instead of just unconscious.
I never figured to wake up, but I did. The next thing I knew I was back in camp waking up the face of
Doc Baxter. 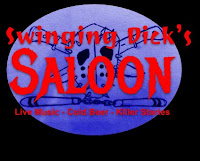 Want more? Then go get yourself a copy of A Night at Swinging DIcks Saloon. The E-Book is only 3 bucks and a physical copy is only $5 (yep we're serious only one Lincoln)

Be sure to stop by The Swinging DIck's Saloon Shop for the official gear too. Get free shipping with the promo code COOL


Get this on your chest


The 10th Rule Books Merch Shop is open as well.

and that free shipping with the promo code COOL works there too. 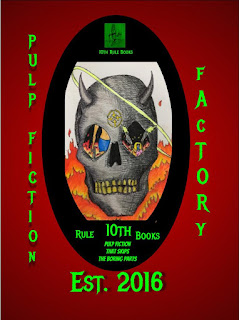 Yep, we've got this on a shirt